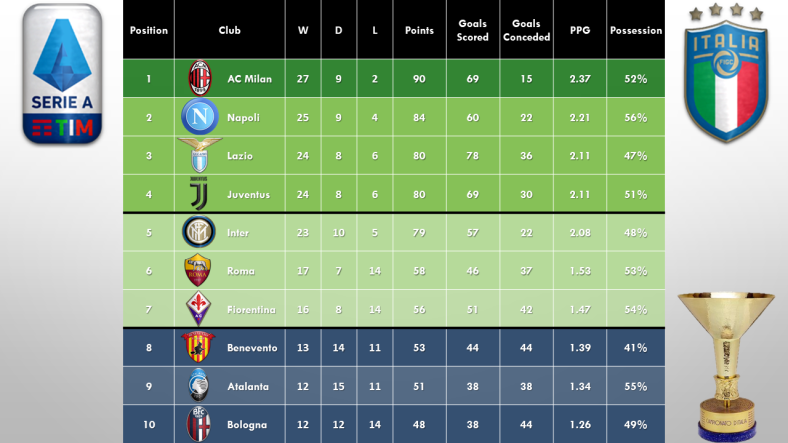 The 2021-22 Serie A season saw AC Milan defend their title, with a six point gap to second placed Napoli. I Rossoneri improved upon their points total, picking up an additional two, and maintained their frequency of clean sheets when compared to the 2020-21 season. With 69 goals scored (one fewer) and 15 goals conceded (two fewer), AC Milan’s dominance over their Serie A rivals looks to have become rooted once more.

Last season’s runners-up, Atalanta didn’t even make the Europa League places, finishing 27 points worse off compared to the previous campaign, despite creating more chances and having more possession compared to 2020-21. 18 fewer goals was their biggest issue, with forwards Gabriel Barbosa (6), Duván Zapata (12), Musa Barrow (5) and Josip Ilicic (2) scoring just 25 goals between them. In 2020-21, Zapata (16) and Gabrigol (19) managed 35 between them – a remarkable drop-off from Gabrigol.

Napoli improved their points total by seven, which was enough to see them rise up the table by two positions, thereby solidifying their Champions League status. Lazio and Juventus joined them both ending up on 80 points.

At the bottom of the table, two of the promoted sides, Udinese and Lecce, returned back to Serie B. Whilst Sassuolo’s defence was around average for the bottom half of the table, their inability to put the ball into the back of the net led to their relegation – their failings catching up with them from last season, with just 29 goals per season. The other promoted team, Frosinone, faired much better, finishing 13th and a full twelve points above the relegation zone.

The haves and have-nots

Taking into account expenditure upon salaries and looking at the number of points gained, Juventus once again are out on their own with their salary spending, but this was not still enough to land them the Serie A title. I Bianconeri actually reduced their salary expenditure by £20.71m compared to last year and yet gained 3 extra points. Comparatively, to pick up the extra two points that AC Milan earned, they spent an extra £13.63m on wages – the second largest salary hike behind city rivals Inter Milan (£14.53m) in their forlorn efforts to attain Champions League qualification.

Lecce’s salary outlay (£22.10m) was somewhat reflected in their overall points total and relegation, but credit should go once more to Perugia (£16.42m) and in particular Frosinone (11.75m) given their lower middle-table finishes on such small salary budgets. Their backroom staff clearly overachieved given the financial resources available to them, eking out more from their respective squads than could otherwise be expected.

It’s worth pointing out that the correlation between salary expenditure and total points has actually strengthened between 2020-21 and 2021-22, with the R2 figure rising from 0.4368 to 0.6123, suggesting that wage expenditure has become increasingly important to be successful – broadly in line with Szymanski’s findings.

Success – with or without the ball?

The 2020-21 season demonstrated a reasonably strong correlation between possession and PPG with an R2 of 0.427. Yet the season just past saw that relationship entirely disappear, with the amount of possession having essentially no relationship to the PPG that teams picked up. Given Serie A’s relatively low average goals per game (AGPG) of 2.45 compared to those of the EPL (2.76 AGPG), Bundesliga (2.65 AGPG), Ligue 1 (2.63 AGPG) or La Liga (2.58 AGPG), it’s clear most managers favoured a defence first approach, and had their teams adopt a low-block to form a solid defensive system in response to much larger, more financially powerful teams and also perhaps down to the physical, mental and technical capabilities that their players possess.

Lazio and Inter Milan appear to be the main exponents of playing successful football without the ball, with Lazio having an average of 47% possession over the season, yet picking up 2.11 PPG. This is an impressive metric, clearly proving their defensive solidity – underpinned by their 13 clean sheets, 7th best in the League. Both teams eschewed the ball, with Inter (11,834 completed passes or 311.42 per 90) ranking 16th in terms of passes completed and Lazio lower still at 18th – behind only Benevento and relegated Udinese – with 10,990 completed passes (289.21 per 90). For context, Napoli (ranked 1st) completed 16,984 passes (446.95 per 90).

Inter Milan averaged marginally more possession, at 48%, and enjoyed 2.08 PPG. Their defensive capabilities were far superior to that of I Biancocelesti – registering just 22 goals conceded and 21 clean sheets. However, I Nerazzurri were not as strong in front of the opponents goal – scoring 19 fewer goals than the sky blue team from the capital.

Given the respective managers in charge of the two teams, this approach to their teams’ football makes sense. Both Simone Inzaghi (Lazio old-boy) and Diego Simeone (former Inter Milan great) favour counter-attacking football, and from the metrics, their very styles have yielded very similar results. Inzaghi’s preference for vertical tiki-taka and a 5-1-2-2 DM WB formation may mean that possession is turned over more frequently than is typical average for the League, but it created goal scoring opportunities of far higher quality – with their players scoring from more than 10% of their overall shots. In contrast, Simeone’s tactical rigidity actually yielded more shots per ninety, yet the same number on target per ninety as Lazio. With only 7.23 goals/100 shots, their strikers Lautaro Martínez and Andrea Belotti appear on the face of it to have been somewhat wasteful. Yet Martínez scored 0.49 goals per 90s, with 22 goals in total, and a not awful shot conversion rate of 12.2% on the back of a 47% shot accuracy. This might go some way to alleviate any pressure upon him and put it back more onto Belotti (4 goals at 0.18 NPG/90, shot conversion rate 5.8% and 42% shot accuracy) and/or Simeone’s chosen tactical system.

This is backed up by the below graphic looking at the metrics for the number of chances created per ninety against shot efficiency (goals/shots) that were created for them – more than three chances per ninety – joint fourth in the League. This graphic also seems to underpin the failure of Atalanta’s forwards – the chances were there for them to put away, they simply seem to have failed to take advantage of them.

Equally, there appears to be no significant correlation between the amount of time that teams have the ball and the number of goals that they concede. Frosinone are a good example of this – joint fourth in the possession metrics, but the fourth worst defensive record, albeit a minnow in a sharks tank.

It’s notable that only Roma out of the ‘Big 6’ failed to keep a significant number clean sheets and pick up more than 1.6 PPG. A sign that they have perhaps still failed to redress the loss of Alisson to Liverpool in 2018. Clearly investing into a top level defence and goalkeeper yields results and helps sides to compete for the European places.

Looking at Roma’s number of goals scored, it could be argued that I Giallorossi recruitment team have other areas to address first. Their number of goals scored to frequency of shots highlights that they could do with an upgrade on Odsonne Edouard and Patrik Schick, with Pierre-Emerick Aubameyang likely to see even fewer minutes given his age. Both of their younger forwards had a goal conversion rate of less than 10% – 8.3% and 6.8%, respectively. Comparatively, rival Lazio forwards Ciro Immobile (24 goals) and Carlos Vinicius (17 goals) had 15.8% and 12.9% accordingly.

Ciro Immobile was crowned the 2021-22 Capocannoniere – his 24 goals outranking the 22 scored by both Piątek and Lautaro Martínez. Whether or not the 32-year old Lazio forward can continue to out-compete his rival strikers to achieve this feat will remain to be seen in 2022-23. Given his previous proficiency in front of goal and Serie A’s history of more senior strikers having great longevity, there’s every possibility.

The new blog post will take a look at AC Milan’s tactical set up to analyse their continued success.